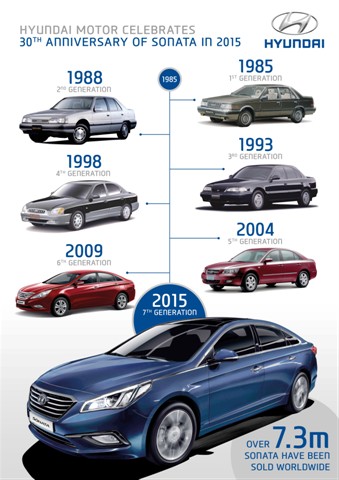 2nd Generation
Sonata (1988) - Unlike the 1st
Generation model, which was rear-drive, the 2nd Generation Sonata
employed a front-wheel drive system for enhanced interior packaging efficiency.
As Korea’s first independently-designed model, it departed from angular design
language and adopted a more organic, aerodynamic design. The facelift of this
generation, launched in 1991, was the first model to be badged with the newly
revised Hyundai logo.

4th Generation
Sonata (1998) - The 4th Generation
Sonata, launched in 1998, was the best-selling model in Korea from February
1999 to August 2000. This generation was sold in Europe and was equipped with
an in-house developed engine and a Hyundai Intelligent Vehicle Electronic
Control (HIVEC) transmission. It was also the highest scoring mid-size sedan in
the 2004 J.D. Power Initial Quality Survey in the U.S.

6th Generation
Sonata (2009) - The 6th Generation
Sonata was one of the first Hyundai models to employ the industry-leading
Fluidic Sculpture design philosophy. Its bold and compelling design, powerful,
efficient engine and solid performance created a new sensation in mid-size
sedan markets throughout the world with record sales, solidifying Sonata in the
minds of consumers as one of the Hyundai’s most recognizable models. In
addition, the Sonata Hybrid model was introduced globally on the Sonata
platform in 2010.

7th Generation
Sonata (2014) - The latest 7th
Generation Sonata has further refined and balanced the convention-shattering
version of Hyundai’s Fluidic Sculpture design philosophy, raising the bar for
the mid-size sedan segment in both design and performance. Further, the all-new
Sonata expanded its powertrain offerings with two additional eco-friendly
models, including the Sonata Hybrid unveiled in 2014, and the first Sonata
Plug-In Hybrid model, introduced at the North American International Auto Show
in Detroit in 2015.